So today I have decided to talk about humor levels.

Okay, let me just say one thing before I begin this. I am not funny. At all. I know a few people who laugh at the “funny” things that I say. It’s a big ego boost for me but I have no idea why they are laughing. Just saying.

Let’s start with Peter. He is my youngest brother. Everyone thinks he is funny because he is so darn cute. He is funny. And cute. So, he has the whole cuteness factor going for him. Also, he is very smart for his age, so he says things that wouldn’t be funny except that he’s so young. Also, he’s kinda sarcastic which always strikes us as funny.

Next up is James. I think I shall call him the “Accidental Comedian”. He TRIES very hard to be funny and sometimes he is. But the times he is the most hilarious is when he isn’t even TRYING to be funny. Like when he fried rotten salami. Let me assure you that it was NOT funny at the time. At all. One tiny bit. It smelled SO gross and I was like, “James. Seriously. How could you NOT have known that was rotten?” Our kitchen, our family room, actually our whole house smelled like burnt oil and burnt rotten meat for the rest of the day. But, today I was laughing about it. See, when I laugh about this, he thinks I am making fun of him. I’m not. I’m just laughing cause what he did was so funny. I could tell you a million of these sorts of stories. But I won’t.

John is just funny. I have no idea how he does it. But he is hilarious. Of all of us, he is the one who can get us laughing the hardest. All my friends think he is hilarious. He always has funny things to say, funny stories to tell, jokes he heard “somewhere”. Seriously, the kid is a barrel of laughs. Am I jealous? Maybe a little. 🙂

I am not funny. At all. I try to be funny. And I fail. Sometimes I can make people laugh when I do something stupid. But that’s purely accidental. But I’m not an accidental comedian like James, cause I don’t really do that many funny things. I think I’m hilarious. But I just have this weird sense of humor that only I understand. I do have some friends who think I’m hilarious. I love those friends.

Abby is funny. To me at least. She is sarcastic-like Peter. It cracks me up. She says the things that I’m thinking. She can make ANYTHING funny. On Sunday, we were really tired from our late-night festivities of the night before, so we were laying on our beds and she was reading me entries from my old diaries. She has a way of doing it that makes it really funny. Even the serious or “sad” stuff (because seriously what is serious or sad in the life of an 11-year-old girl…especially if that girl is me).

So, what can we conclude from this? Well have you ever heard of Mendelian Genetics?

Okay let’s say that the gene for being uproariously funny is F. And so then the gene for being not even one tiny bit funny is f. Okay? So if a person had one F and one f, that means they are funny half the time. So, that’s my parents. They are each Ff.

So here’s my parent’s chart:

So, are you following me so far? That’s my parent’s genes up there. The four empty boxes are their “kids” (not yet born). The possibilities of gene mixes.

So, that’s the first mix of genes because you take the gene from the row and from the column. Get it? So the rest would fill out like this: 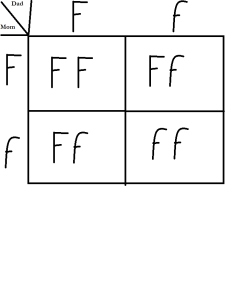 So, that’s how it goes. But, not necessarily in that order. See first, Abby was born. She’s an Ff. 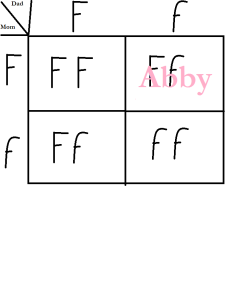 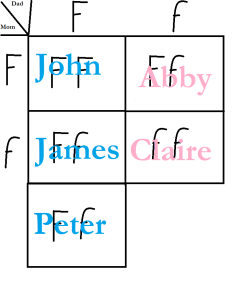 See, mendelian genetics can explain anything.

And yes. I do think this is highly amusing.